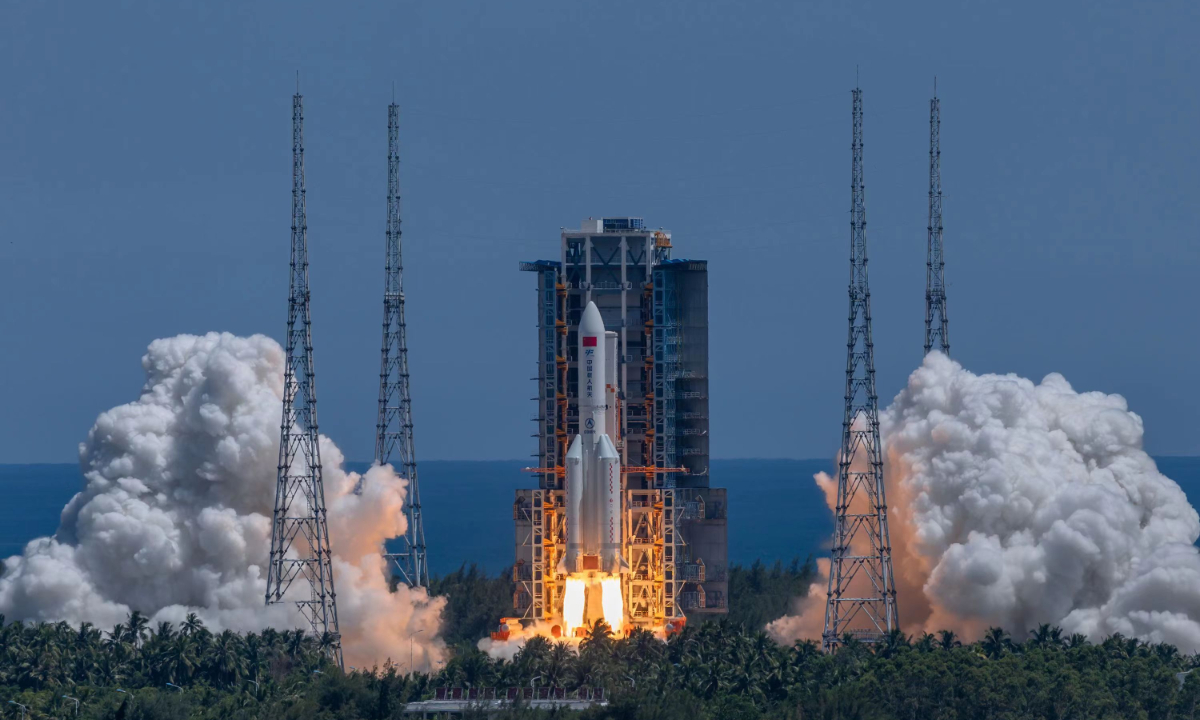 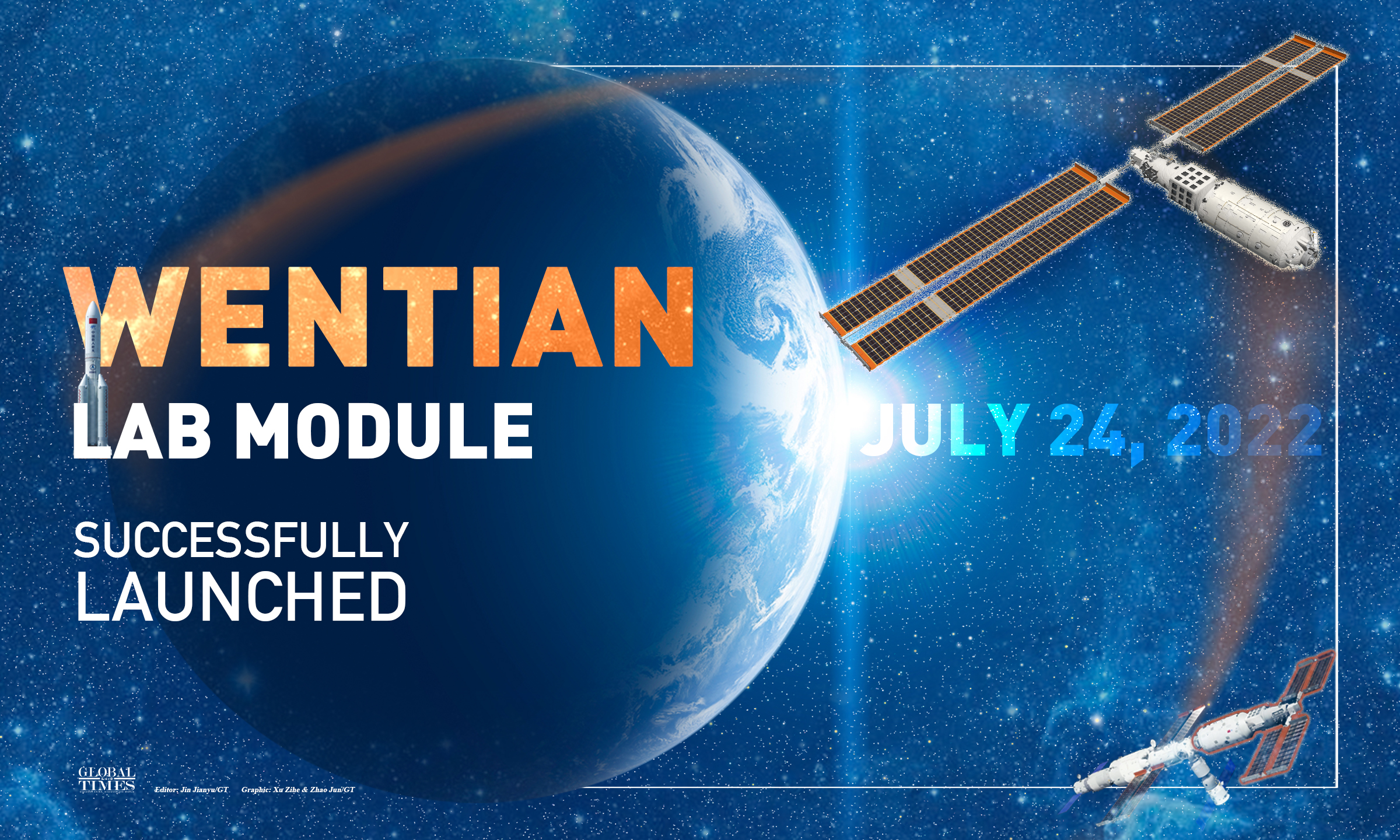 After moving to the Tianhe space station core module in China for more than a month, the Shenzhou-14 crew of three taikonauts are just hours away from performing their first major missions in orbit, receiving the arrival of the Wentian laboratory module and adding it to the three modules of the China Space Station.

With the swaying of coconut trees lining the coastline of South China’s tropical island province of Hainan, the giant heavy lift Long March-5B Y3 carrier rocket took off from the Wenchang Space Launch Site on Sunday at 2:22 p.m. in the afternoon, and successfully sent. Wentian – the first lab module for the country’s space station – into a preset orbit.

After flying for about eight minutes, the Wentian module separated from the rocket body and entered the preset orbit, marking the success of the launch mission, the China Manned Space Agency said in a statement it provided to the Global Times Sunday.

Wentian is expected to make a semi-autonomous rendezvous and docking with the Tianhe core cabin of the space station in the front port, and in a few hours, the Tianhe space station core module for the first time will receive a new spacecraft while the crew is on board.

Called the “heaviest friend” among all active space modules in the world, the Wentian lab module is the second of the three-module basic structure of the China Space Station, after the first the 16-meter-long Tianhe core module launched in April 2021. 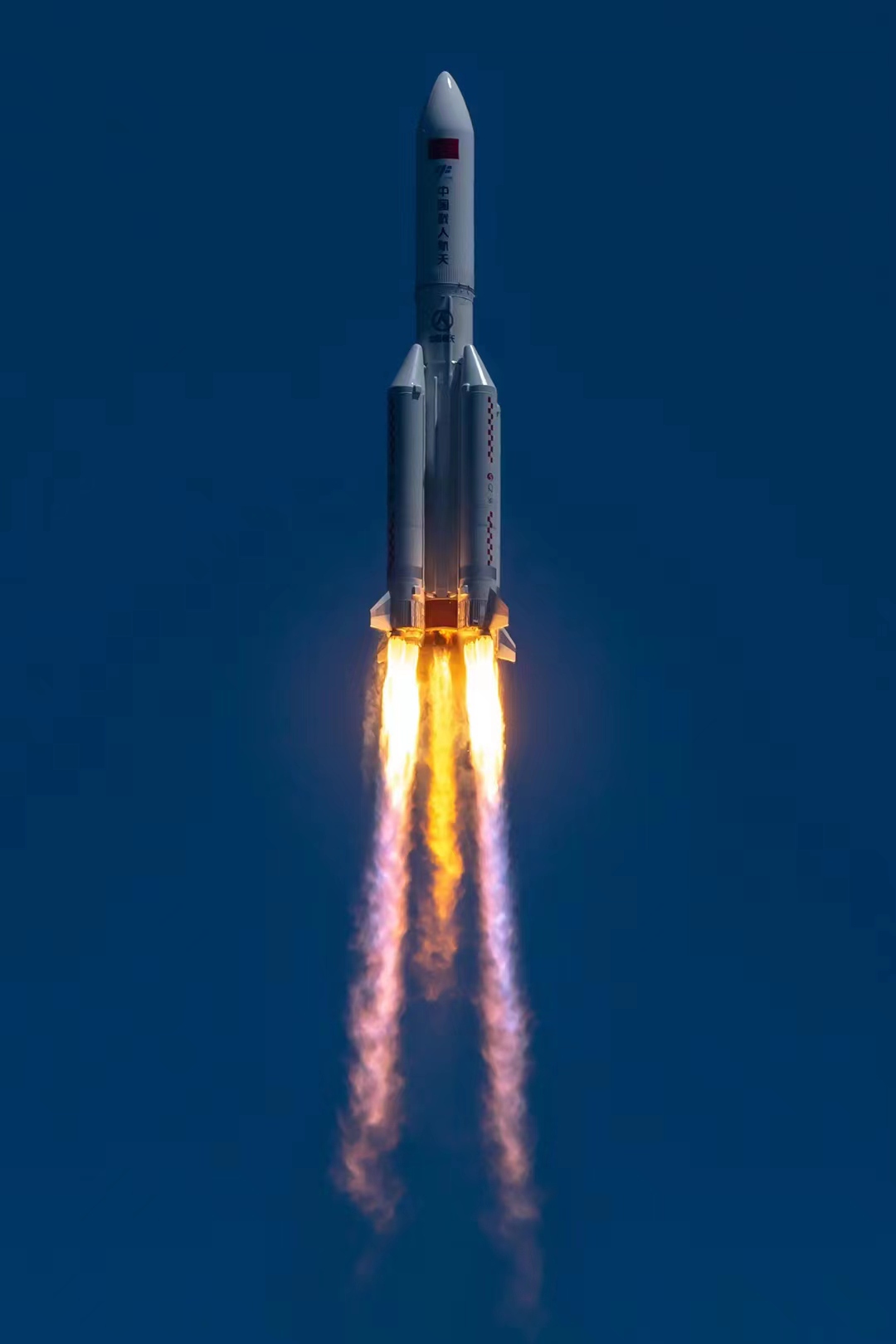 The future expansion structure of the China Space Station, which according to the Chinese space authorities, will weigh more than 180 tons. Now when Wentian landed in Tianhe, the combined weight of the space station reached about 50 tons.

With an all-inclusive systems and functions equipped with Wentian, the lab module is considered by some observers to be a “mini space station.” Will all the module technology offer the possibility of adding new modules to the Chinese space station in the future to further expand its scale and function?

Liang Xiaofeng, Wentian’s chief electrical designer, told the Global Times that from a technical point of view, Wentian has opened the way for expansion, but the next plans are in line with the general project. “We have to analyze and sort out the needs for each plan, but we definitely got the essential technologies [for module expansion] in reserve.”

The new modules added to the T-shape structure will be foreign spacecraft such as lab modules or manned spacecraft, Pang Zhihao, a senior space expert, told the Global Times.

Summarizing the functions of the lab module, the state-owned space giant China Aerospace Science and Technology Corp (CASC,) the major contractor of the space station program, said in a statement sent to the Global Times that the Wentian primarily designed with the ability to jointly manage and control the assembly of the station, as well as the ability to dock, transfer and park the core cabin. It will also support the maintenance of taikonauts in orbit by providing a special airlock cabin and emergency shelter to ensure their safety during extravehicular activities or spacewalk missions, and support various scientific experiments inside and outside the cabin.

For starters, when Wentian docks at the space station combination, the living and working space for the taikonauts will immediately double. Also, the Wentian’s larger diameter airlock will facilitate crewed spacewalk missions, an obvious change for the better of the crew, etc.

The main functions of the Wentian platform are the same as those of the Tianhe, meaning that the two will serve as a backup to each other, and both of them are capable of covering all the work requirements needed for the assembly, CASC said.

Weighing 23 tons at launch, Wentian consists of three parts: a working cabin, an airlock cabin and a resource cabin, with a total length of 17.9 meters, and a diameter of 4.2 meters. . 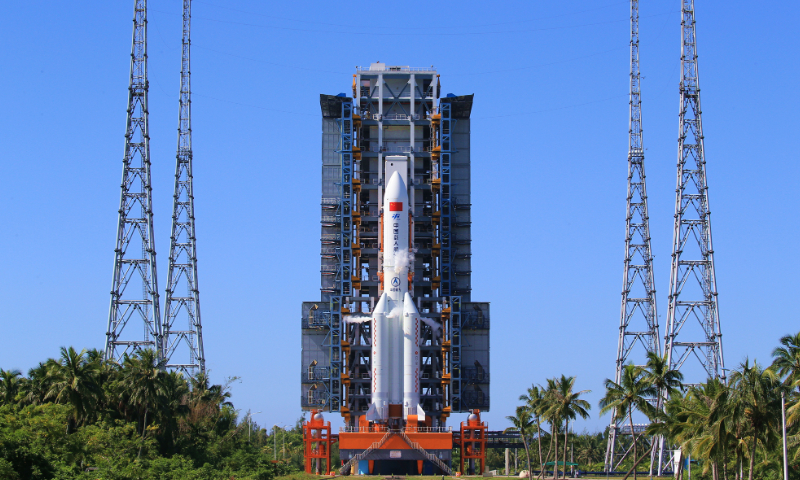 It is almost as heavy as a Beijing subway car, bigger than the Tianhe core cabin which is 16.6 meters long and weighs 22.5 tons. Wentian is also heavier than any other single-module spacecraft with a flight function that remains in active service, including those sent to the International Space Station, according to CASC.

Wentian’s working cabin is the largest singular-sealed cabin in China, including three sleeping rooms and a sanitary area. Upon docking, the space station can accommodate six astronauts. It means that when the Shenzhou-15 mission crew meets Shenzhou-14 for the rotation in space, Li Jinlin, a chief designer of extravehicular suits of the Astronaut System under the China Manned Space Agency, told the Global Times.

The airlock cabin has a unique shape – square on the outside but round on the inside. It is an “upgraded version” of one of the core modules, expanding the “fitting room” for astronauts to change into space suits and prepare for their spacewalk missions. , and a one-meter diameter gate, which enables an easier exit and entry for the astronauts, while also allowing them to carry large equipment outside the cabin.

Therefore, the airlock cabin at Wentian will be the main exit-entry point for extravehicular activities, while the previous one at Tianhe will serve as a backup.

Meanwhile, with two exit-entry cabins, they can greatly improve reliability and better ensure the safety of taikonauts during emergencies during extravehicular jobs, Li said. 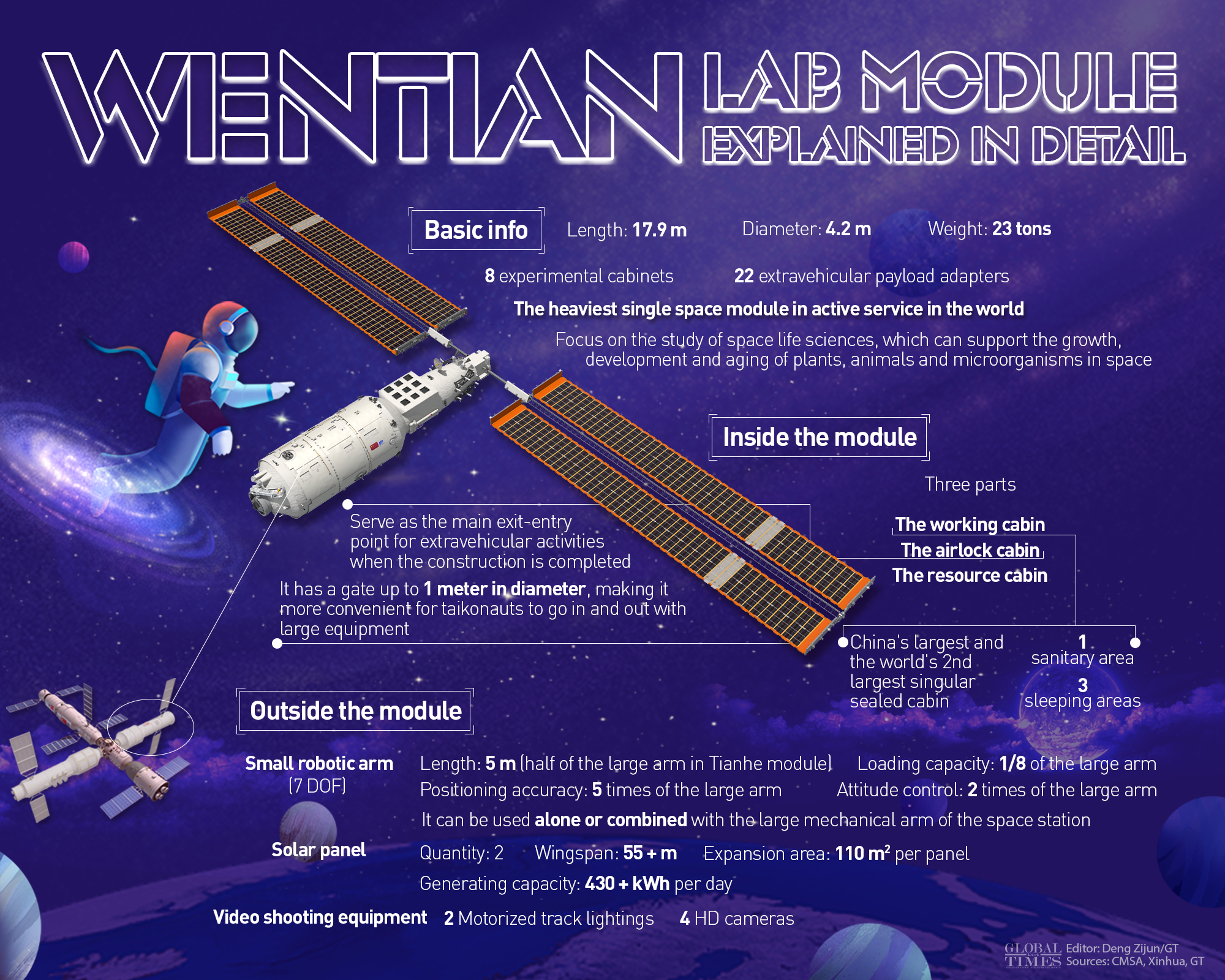 Outside the airlock cabin are 22 extravehicular payload interfaces. In the next decade, experimental payloads to be delivered to the space station will be precisely “plugged” into their corresponding interfaces with the help of robotic arms, which will no longer require manual operation by astronauts, CASC revealed to the Global Times.

Besides the 22 interfaces, the Wentian lab also hosts eight experimental cabinets. It will mainly focus on the study of life sciences in space, which can support the growth, development, genetics and aging of many species of plants, animals and microorganisms under the conditions of space, Lv Congmin , a research fellow at the Chinese Academy of Sciences and deputy chief designer of the space utilization system of the China Manned Space Program, told the Global Times.

More than 10 research directions are planned and more than 40 scientific projects have been established for Wentian, Lv said.

Another lab module Mengtian, scheduled to launch in October, will focus on microgravity scientific research and will be equipped with experimental cabinets for fluid physics, materials science, combustion science, basic physics and space technology experiments. . 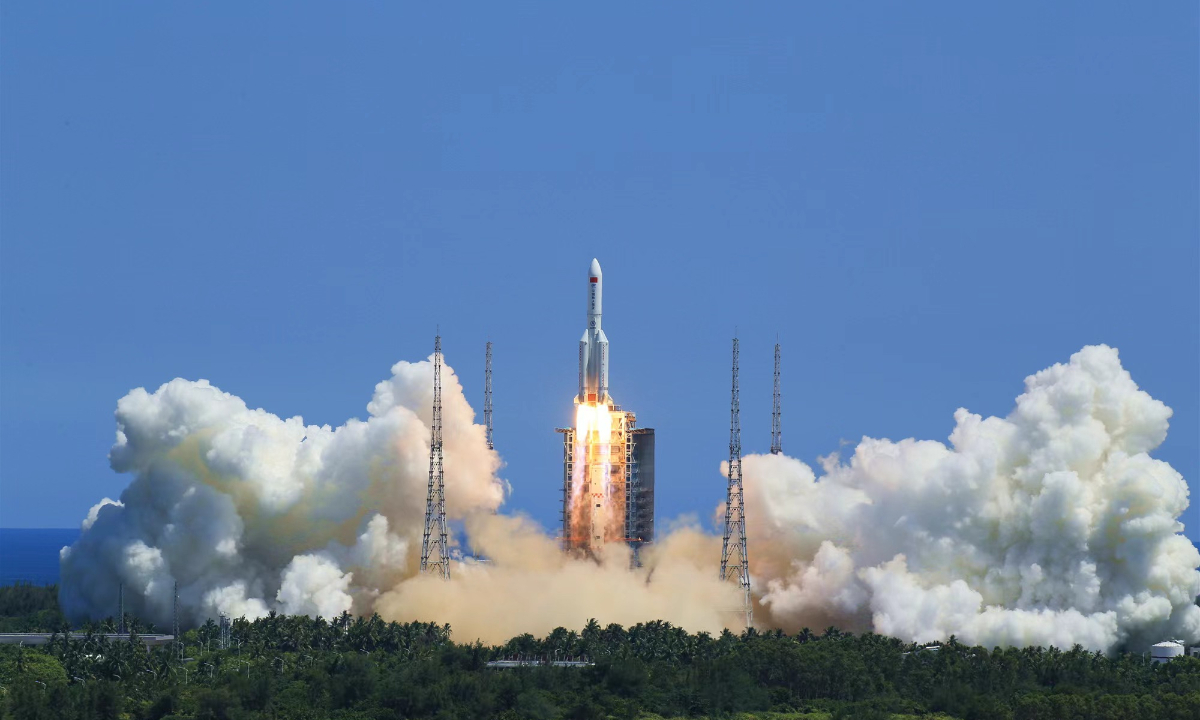 Another highlight of the Wentian lab module is the five meter long small robotic arm placed outside the airlock cabin. With seven degrees of freedom, the set has higher precision and flexibility to “hold” small and medium-sized equipment, and can perform more delicate operations than a larger robotic arm. with Tianhe module.

The weight and length of the small robotic arm is about half of the large Tianhe core cabin, and the load capacity is about one eighth of the large arm. When combined, they have a total height of 15 meters, and will be able to “climb” all three modules of Tianhe, Wentian and Mengtian in the future.

Besides its larger size, Wentian has a set of extra long wings – flexible solar panels with double degrees of freedom. The full wingspan is over 55 meters, longer than half a soccer field, setting a new record for solar panels used for Chinese spacecraft. Each panel has a spread area of ​​about 110 square meters.

The two solar panels can effectively collect additional solar energy, generating an average of more than 430 kiloWatt hours per day and providing enough power for space station operations. When placed on the ground, the daily power generation of the solar panels is enough to support the electricity needs of an average household in Beijing for one and a half months.

Upon completion of the space station, one of Tianhe’s solar panels will be moved to the back of Wentian, and then the core module will focus only on the operation of the station, while the lab module will be the main “power. house.”