With 200,000 solar panels, Lapeer solar parks was the largest solar park in Michigan when it was commissioned in May 2017. It is supported by DTE’s MIGreenPower program.

In an agreement negotiated between Lapeer City Manager Dale Kerbyson, Detroit DTE Energy officials and contractors, DTE agreed to a 20-year lease on a 190-plus acre site on I-69 between M-24 and Lake Nepessing Road near DeMille Road to the north and a 150-acre site located north of Turrill Road between M-24 and Clark Road. DTE Energy remains interested in the marketing aspect that Lapeer solar energy farms bring to its brand and is associated with zero-emission energy production. The largest of Lapeer’s solar energy farms can be seen by passers-by on I-69 around the Thumb Correctional Facility. Signage to indicate the presence of the solar panel field is located along the freeway. 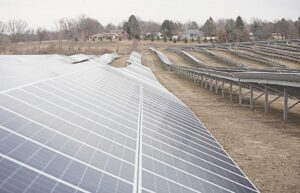 The agreement reached between the city and DTE Energy allows for a 10-year extension of the original lease. The Lapeer solar arrays generate enough electricity to power 9,000 to 11,000 homes and businesses on the regional power grid.

During the August 6 event, DTE will provide guided tours of the solar park, entertainment, activities for children and refreshments. The event is free, open to the public and will be held rain or shine. Note, not all parts of the tour/open house are fully handicapaccessible and the terrain onsite is rocky and uneven.

By adminJuly 31, 2022Leave a Comment on DTE Energy to provide guided tours of Lapeer solar-panel fields on Aug. 6